SurveyCTO forms can be created in any language, or even contain multiple languages in the same form.

In the form designer, click to edit Form settings, and then rename the default language (english) to the correct language.

In the spreadsheet definition, on the settings worksheet, specify the name of your default language in the default_language column (in row 2).

If you would like the users filling out your forms to be able to switch between languages, you can add multiple languages to the same form. This entails creating a duplicate of each piece of text within your form (i.e., all the question labels, choice labels, etc.) in the new language.

In the form designer, click to edit Form settings to rename, add, or delete any form's languages.

In the spreadsheet form definition, follow these steps to add additional languages to any of your forms:

Where to put the new language columns?
A helpful hint: when you add columns to your worksheets, you probably want to add them all the way at the end (to the far right). Otherwise, if you later copy and paste fields from other forms, the earlier columns won't line up and the pasted fields will have information in the wrong columns (e.g., the relevance expression might end up in the hint column).

And that's it! Once your form includes support for multiple languages, users can switch between those languages when filling out the form. From any page of the survey – including the opening screen – they can choose Change language to choose among any of the supported languages. (On mobile, they open the three-dot menu in the upper-right to find the Change language option; on the web, they can use the language selector dropdown in the main toolbar.) 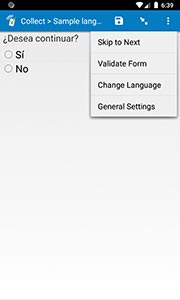 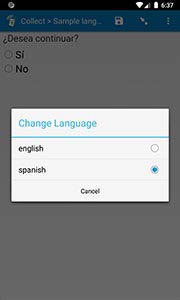 For a working example, see Languages: Including translations.

In addition to all the text contained in your form definition, the text in the interface itself (buttons, menu options like Change language, etc.) is of course important to ensure users are able to understand and complete your form properly. The SurveyCTO platform is designed to try to ensure the interface language is always understandable by the person filling out the form, but there are some limitations to be aware of.

When filling out multi-language forms in a web browser, the interface language will always attempt to match the form language. To make sure this system works well, follow these tips:

For single-language forms and web pages outside of forms, the interface language will attempt to match the language of the user's web browser.

Every server automatically supports the following interface languages for web forms: English, French, Spanish, and Hindi. If you are deploying a form in a language other than those four, you can add your own interface language to your server. See the topic on translating web forms.

Importantly, mobile devices have limited (and idiosyncratic) support for non-Latin fonts. For any non-Latin font, be sure to only use UNICODE fonts, and to carefully paste those UNICODE fonts into the form designer or form definition. Finding a font supported by your devices may require some experimentation, and you may need to source devices locally if international devices do not support the script you require.