The enumerator field type is a new feature that was added to SurveyCTO Collect in v2.72. To make sure the field appears and functions properly in the Collect app, you can enable the enforce minimum app version setting in your server console. See Managing device security for more information, and see Managing enumerators to learn more about enumerator management in SurveyCTO.

In the form designer, click + Add visible field, then choose enumerator as the field type.

enumerator: prompt the user to identify themselves from a list of enumerators in an attached enumerator dataset. There are four ways that enumerators can do this:

When prompting for enumerator identity, the field will default to list mode and allow the user to choose another mode as desired. To default to entry or scan mode instead, specify “default-to-entry” or “default-to-scan” in the appearance column. 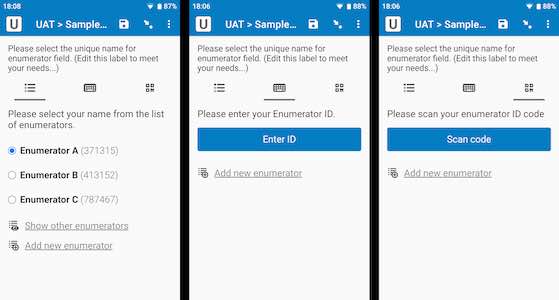